I’ve lived through a fantastic turnaround as reported in TWO YEARS. Thanks to flying I might be on the high of my life. I’ve clearly got the bug, which with few interruptions makes me talk about flying around the clock. Some people see the light but most don’t. It’s not easy to explain the thrill and obsession of flying to someone who has not had his or her feet lifted off the ground. In this post I will give it a serious (but unstructured?) try, most likely without success. I might sound dopey or perhaps like I've just met our savior. To be clear before I start; no drugs or religious awakening involved. I only do paragliding.

I learned to fly in coastal conditions where you depend on sea breeze pushing in against cliffs and slopes to create a soarable lift band. It's now three months since I was SOLO SOARING at TAYLORS MISTAKE. I'm far from an expert and still very new to the game of flying but I do feel like I've come a long way. In and around Nelson (TASMAN AIR) I slowly started learning how to fly in thermic conditions, in bigger mountains. It's a different sport, a game with new rules.

At inland located mountains, such as ranges surrounding both Queenstown and Wanaka, paragliders mostly rely on hot rising air to stay up; thermals! If not in rising air you will loose height fairly quickly; it's a constant fight against gravity. On sunny days the ground heats up and air starts rising. A classic thermal is shaped like an ice-cream cone, a dynamic body of rising air with a strong core in the middle. Flying people are in constant search of this invisible core and thermal which with the right technique can be used as an elevator to high sky. Look, feel, think and analyze. You try to read the landscape, you look at different wind indicators on the ground and in the sky. Where will the air be rising? Movement in trees or along grassy slopes? What side of the mountain has been heated by the sun? Rocks become hot! If there is a paved road with traffic a vehicle can trigger and release the heat! Look at the thermic experts; eagles, vultures, hawks! Is there weather wind pushing in? Look at lakes, ponds, smoke, dust or flags. Look at clouds! Are those fluffy things rising? Shape, speed, color and character!? It is very difficult yet utterly logical. Once you get it, once you find the thermal and actually manage to hook into it's ripping strong core you can be brought up several hundred meters. In some areas we're talking kilometers. To stay high for hours or to make it up over the ridge for a rewarding and snow-covered view puts you in a euphoric state.

Above: High at Treble Cone, Wanaka.

A thermic elevator rarely comes with lounge music and a relaxed but awkward conversation; it's a thrilling and wild ride which can be seriously intense, violent and sometimes intimidating. Just like being washed around by a ripping current underwater you feel small and vulnerable to the massive force of nature. It often becomes turbulent if you get half the wing in a thermal (rising!) and half of it outside, where the air is cold (and sinking!). If the turbulence makes your wing collapse you want time and margin to recover; altitude means safety! Nobody has ever crashed with the air as a wise pilot pointed out recently.

Looking back at how little I understood a few months ago also makes me question how much I actually know at the moment. I've committed myself completely to flying but I've hopefully only experienced the very beginning of my personal learning curve. I enjoy teasing Loic, my french flying buddy (who started flying when he was thirteen), about his sometimes hilarious English accent. He always bites back in different ways and a few days ago he said;

In that moment his comeback got to me, in hindsight I tell myself I didn't start a day too late.

I’ve made the comparison a few times lately but it doesn’t make it less true; flying is like a very heavy drug. It's pretty much a healthy version of heroin. A seriously addictive but good drug. In the air it all feels very surreal and grand. Once back on ground, fresh with flying dopamine's, a glimpse back at the sky and mountain triggers a serious buzz. Looking back at what you've done, seen and where you've actually been makes the brain go absolutely mad. A certain tension slowly eases off and you feel very alive and present. It becomes impossible to hold back the smile that indicates your zen.

I often find myself analyzing for hours and hours. I chat to feather covered comrades and explain to people without wing. I talk, think, read and write. I've tried occupying my mind with other things but lately it's been a true challenge.

Just like any sport or recreational activity there is a community of characters that comes along with it. I've met flying people before but I've never really paid proper attention until recently. The past three months I've met people who fly with slow and fast canopies, jump out of airplanes, fly with suits or throw themselves of a firm base. There are obviously major differences in flying and falling free but somehow it's all connected. Most junkies of the air speak a similar language.

Surprisingly many pilots are older, many times flying since the early 90's. At Treble Cone, where I've done most flying around Wanaka, I met a british gentleman a day or two ago. He was perhaps 60, vacationing New Zealand with his wife. He started flying in the early days, 24 years ago, but had not been flying the past years because of inconsistent weather in the area of the UK where he lived. He didn't feel it was any longer safe since he couldn't spend enough time airborne. He kept looking at the wings and pilots working the thermals on the mountainside high above and it was obvious that he had cravings. We spoke for a while and I asked if he still had flying on his mind? With a serious voice he replied;

You're a young man with many flying years ahead of you, I can tell you're already addicted. It truly is a drug and you should be aware that it only gets worse. I have not been flying the past four years and honestly, it's made me sad and depressed. I can force myself to stay on the ground but I will never stop thinking about flying.

In Nelson but especially Christchurch I heard numerable stories in similar category. Just after my virgin flight in late November my instructor Grey Hamilton took me to meet Matt Stanford who a few weeks before had a serious paragliding accident. On heavy pain killers and with a disabling neck brace Matt showed me around his home. I noticed the classic and famous Leonardo Da Vinci quote framed on the wall; Once you have tasted flight, you will forever walk the earth with your eyes turned skyward, for there you have been, and there you will always long to return. Matt spoke about not flying again, maybe it just wasn't worth it. It's now been four months since his accident, guess who's soaring again?

I feel heaps of gratitude towards the paragliding community in New Zealand. Most pilots are keen to share knowledge, tips and ideas on how to improve and fly safely. It's been incredibly important for my personal progress. It's surprisingly easy to fly, perhaps too easy to get a license but far from simple to become a good pilot.

The past six years have personally involved a fair share of travel as most of you might know. I've visited some seventy odd nations with a pretty diverse agenda. I've done many different things, I've had obsessions. Not long ago I was full, I was ready to go back, settle and marinate myself in day-to-day life before new challenges. Flying has changed things, perhaps everything. I've discovered that there is a new world to explore independently with wing. I've found a sport, lifestyle and community that can take me back to the most beautiful corners of this planet. I need to see it all again, zoom out, see it from above! It's more than a fresh hobby, it's a new tool to discover, a new way to venture the world. I've been on countless backcountry roads, from now on intend to try and stay in blue sky above them.

With favorable conditions it is possible to make significant distance with wing. Experienced pilots, properly equipped and prepared can travel hundreds of kilometers into and through truly remote mountain chains. In your harness you pack essentials; food, perhaps a stove and something to sleep on. The canopy is a perfect tent slash sleeping bag. Hike and fly!

Often I spend time dreaming and planning with my worn world map in front of me; flying has given my map-sessions a multitude of new dimensions. I have a new theme, I can return, I have to start over! If my travels were a half intact jigsaw puzzle, all the pieces are now spread out over the floor again. It might sound drastic but with all honesty, I think I've found my thing, I just don't want to come down.

I'd like to finish this somewhat lengthy post with following video. If my words can't explain, maybe this will. 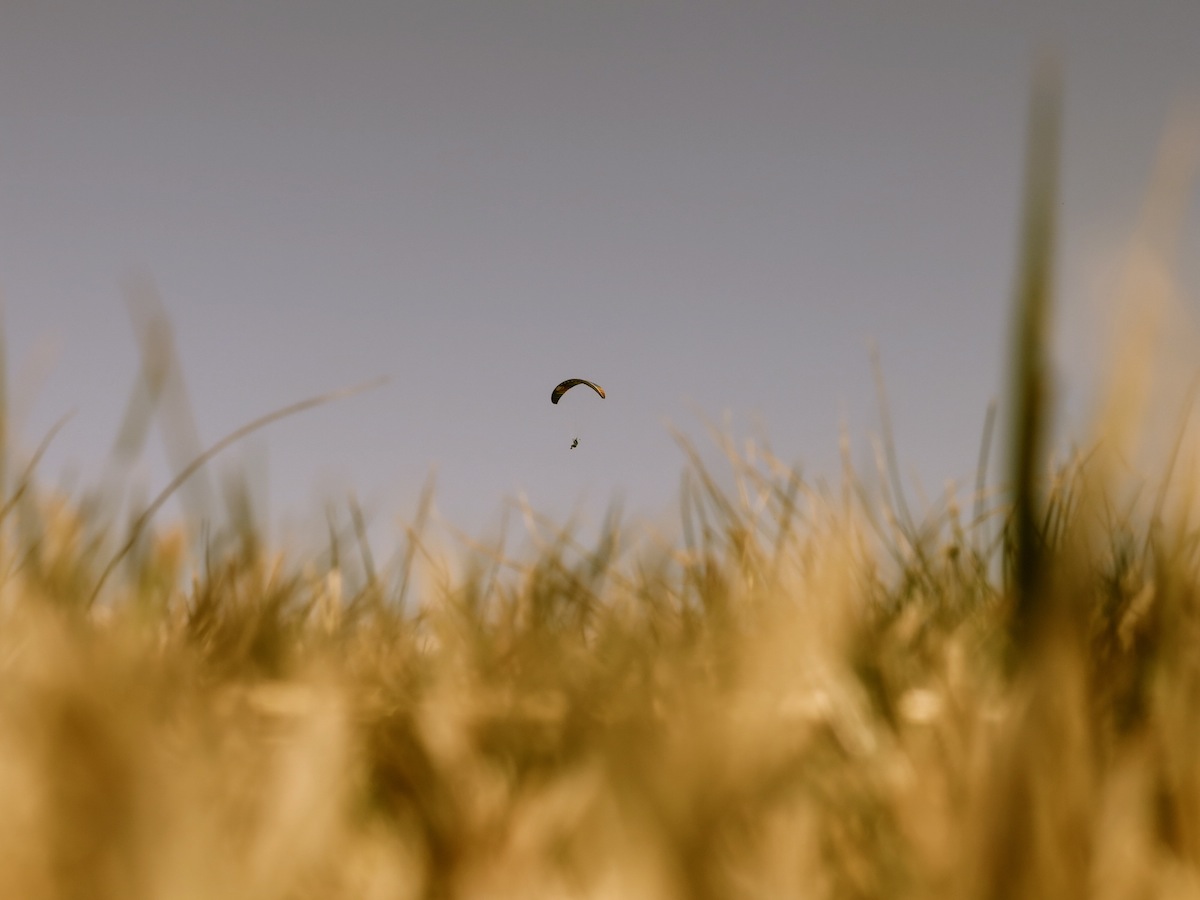 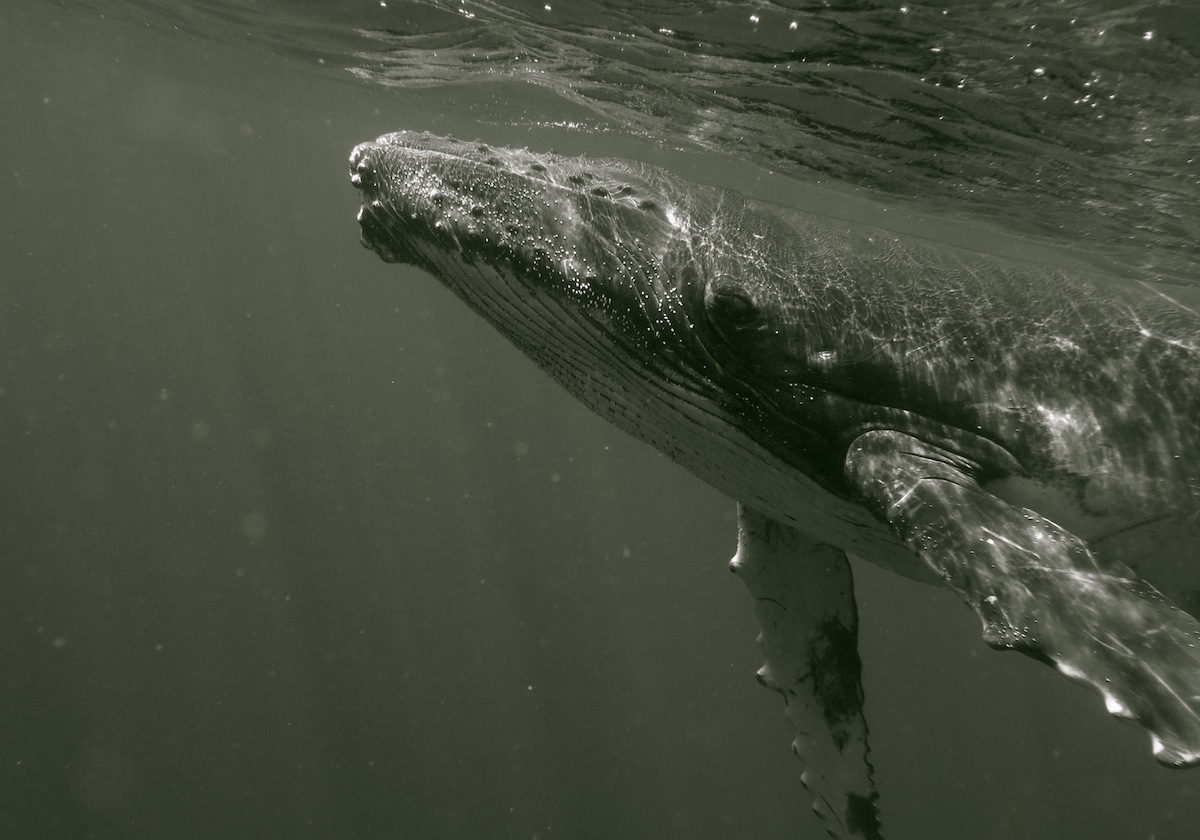 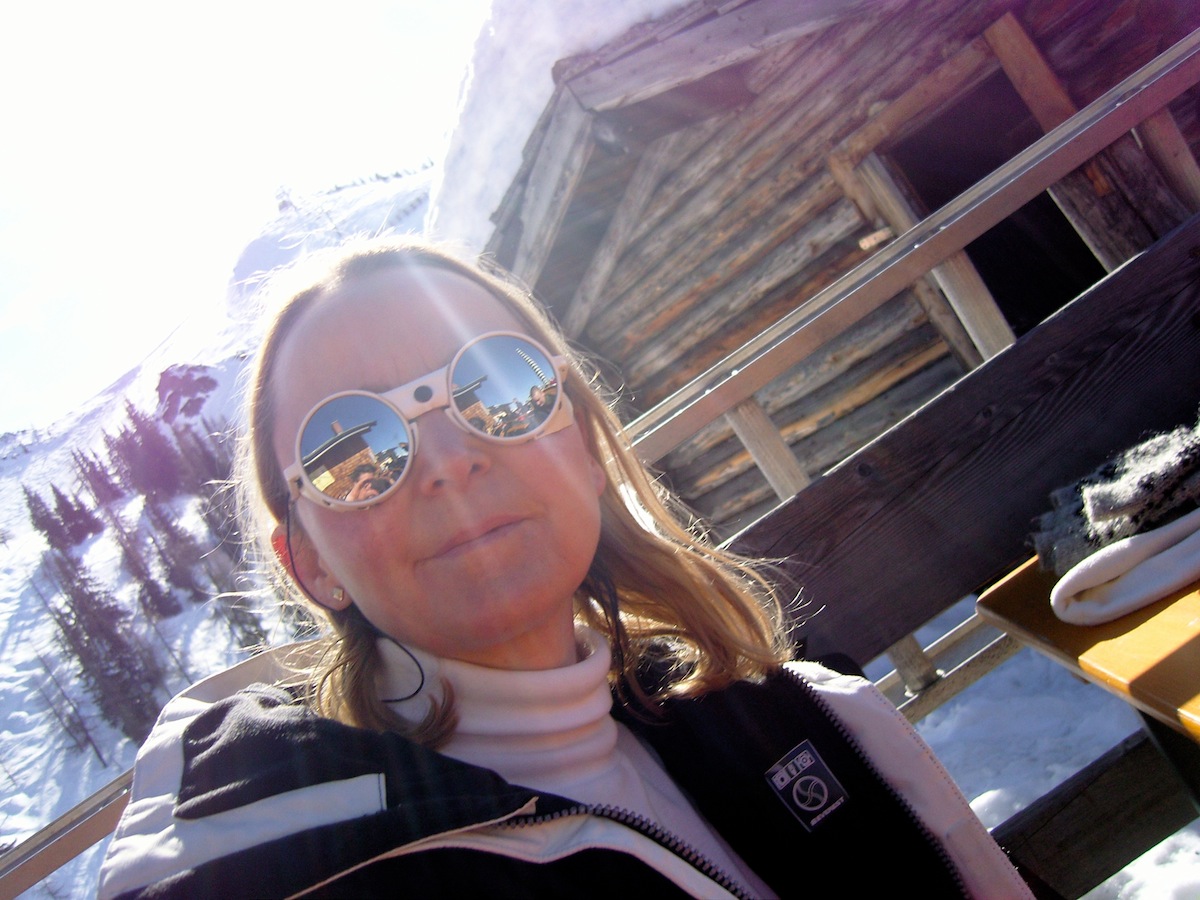 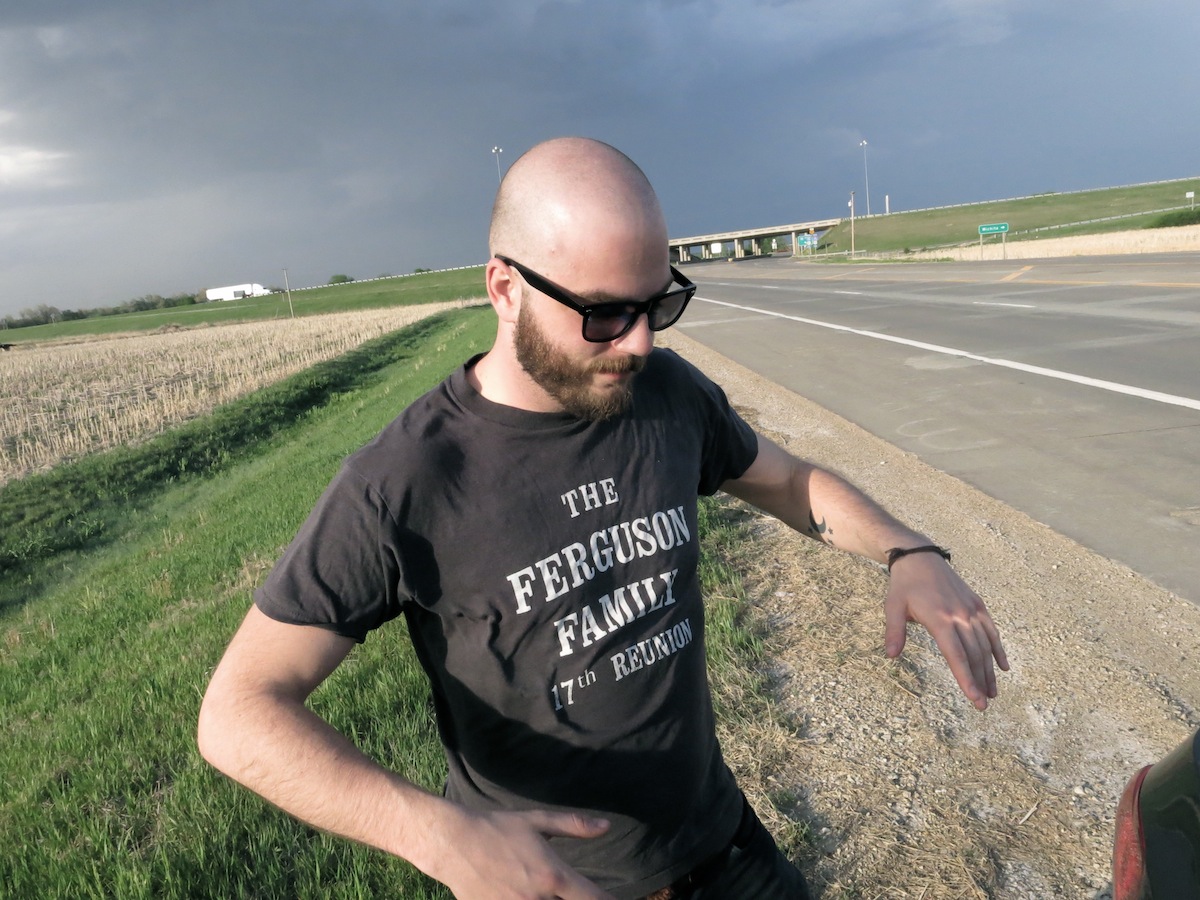 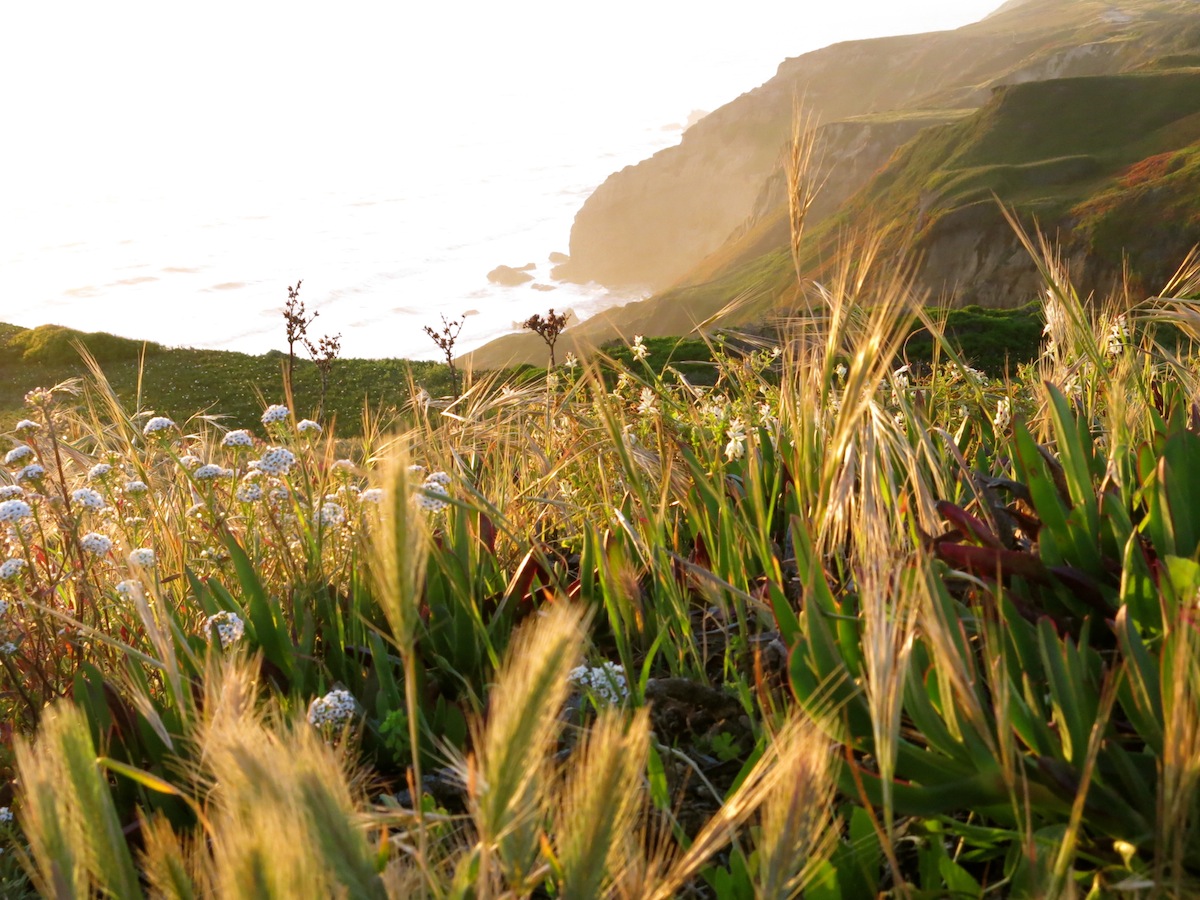 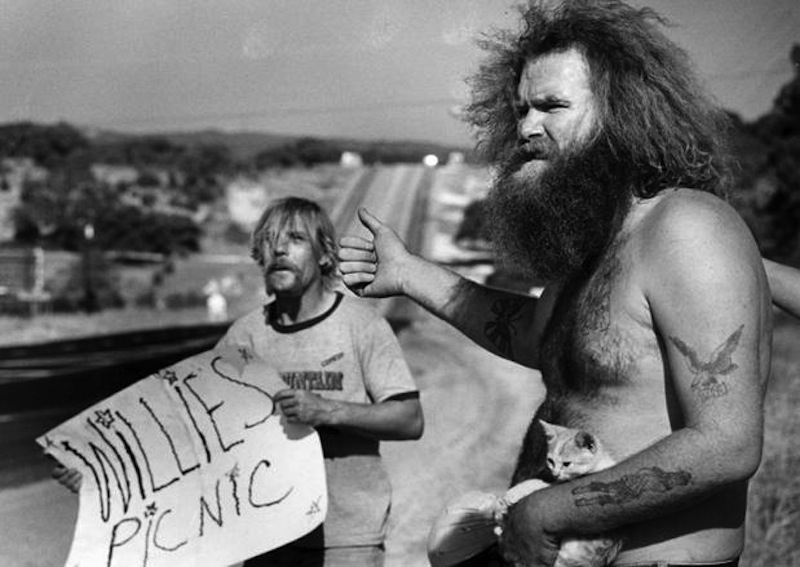 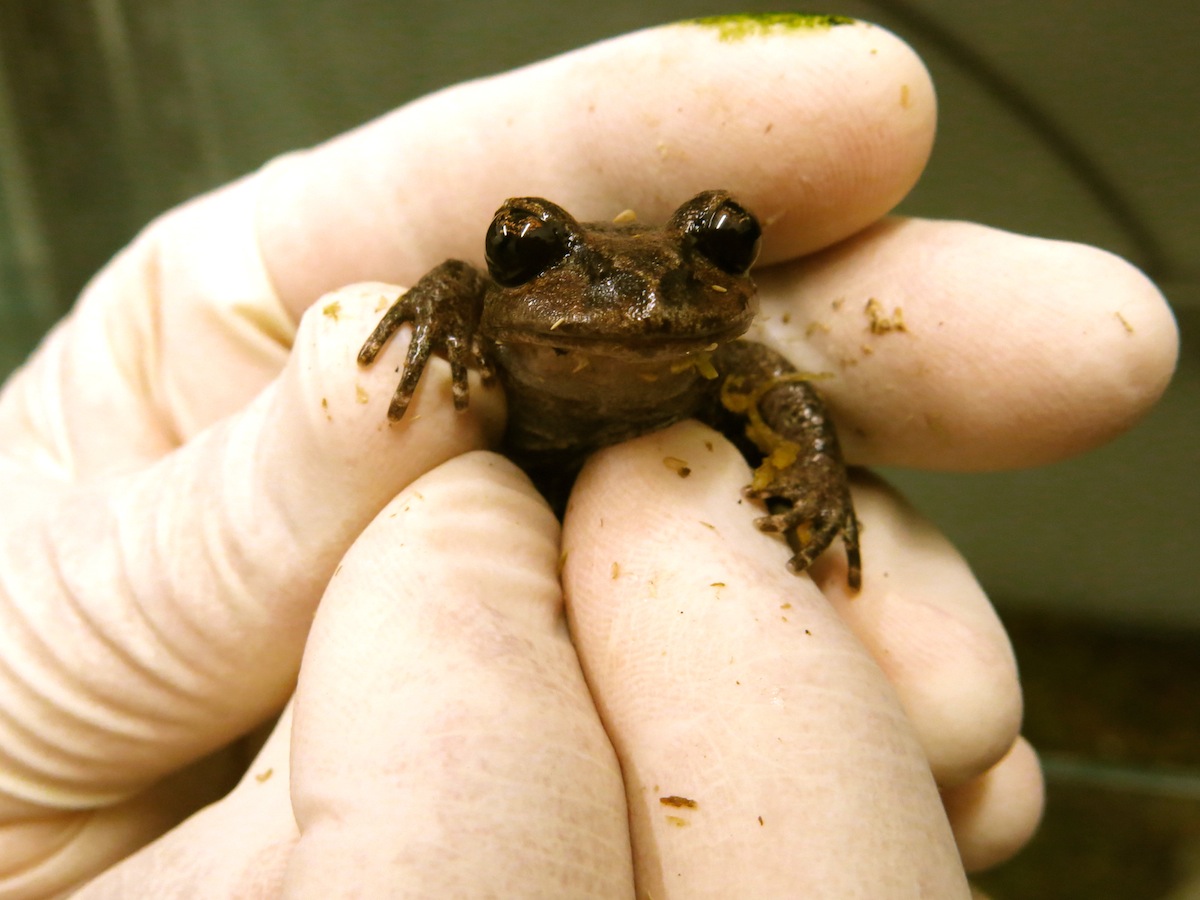 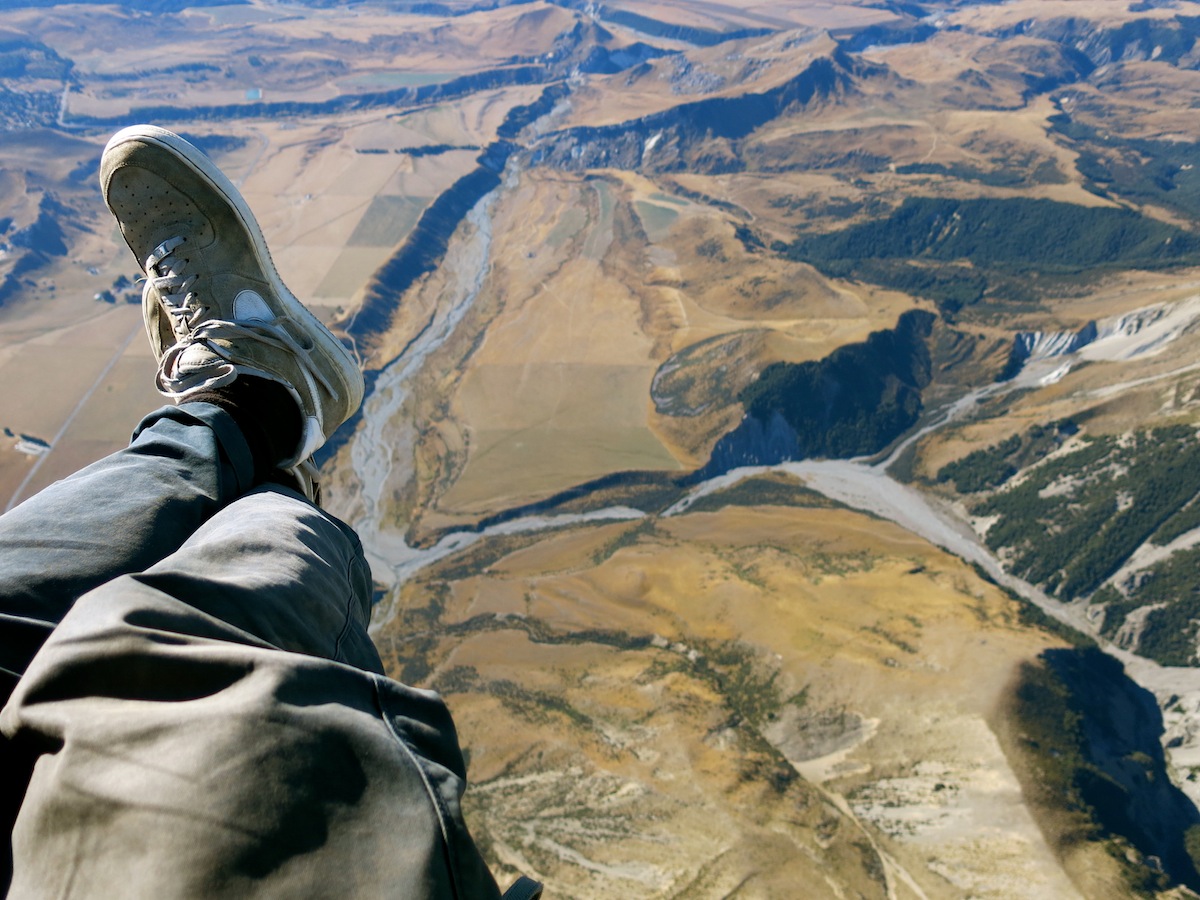 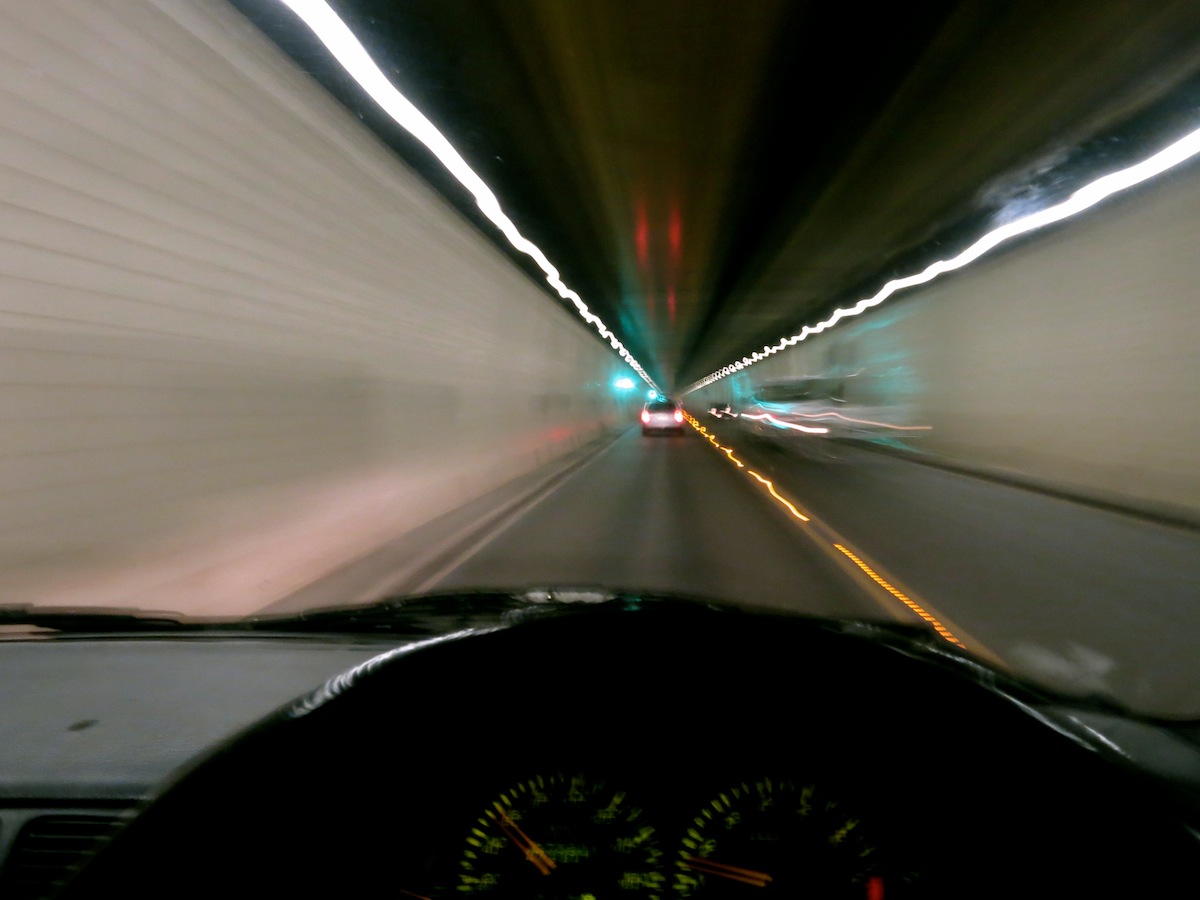 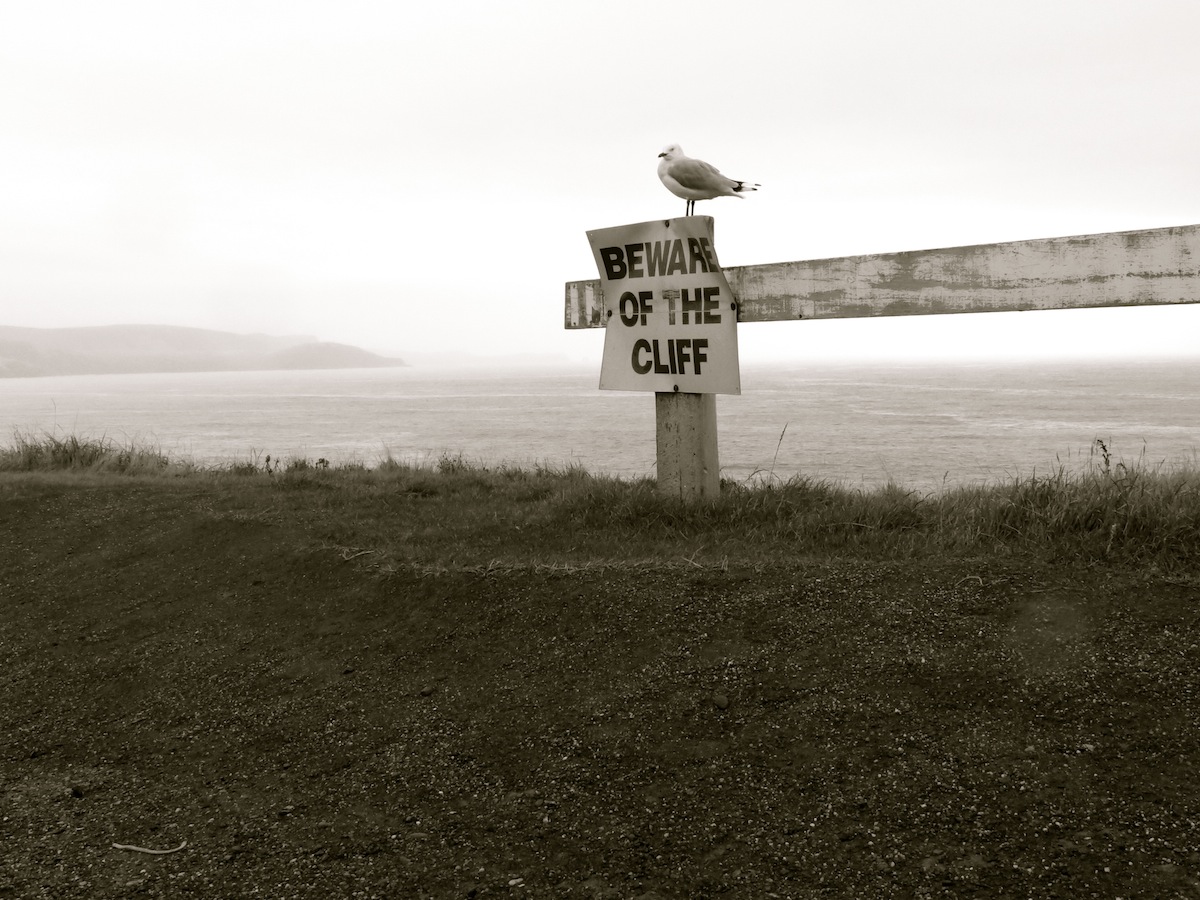 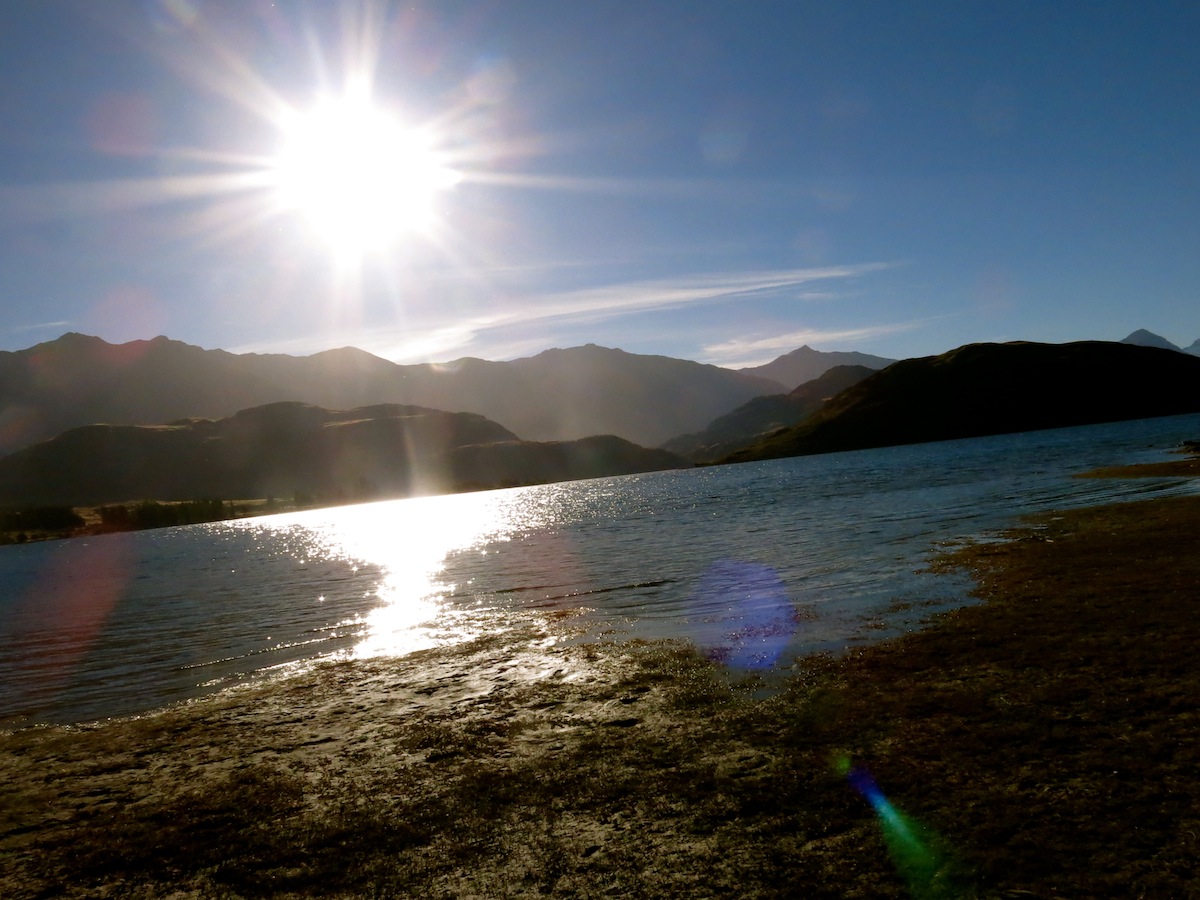 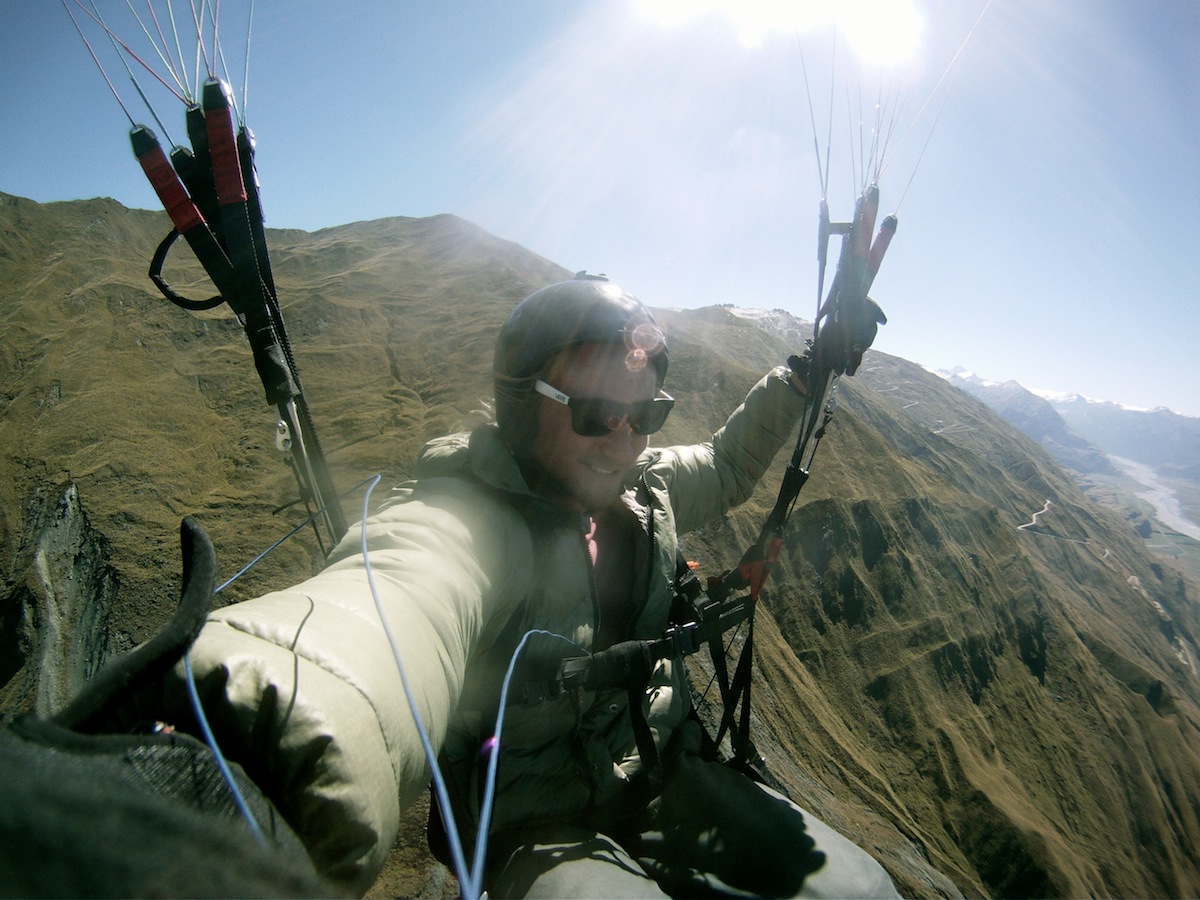 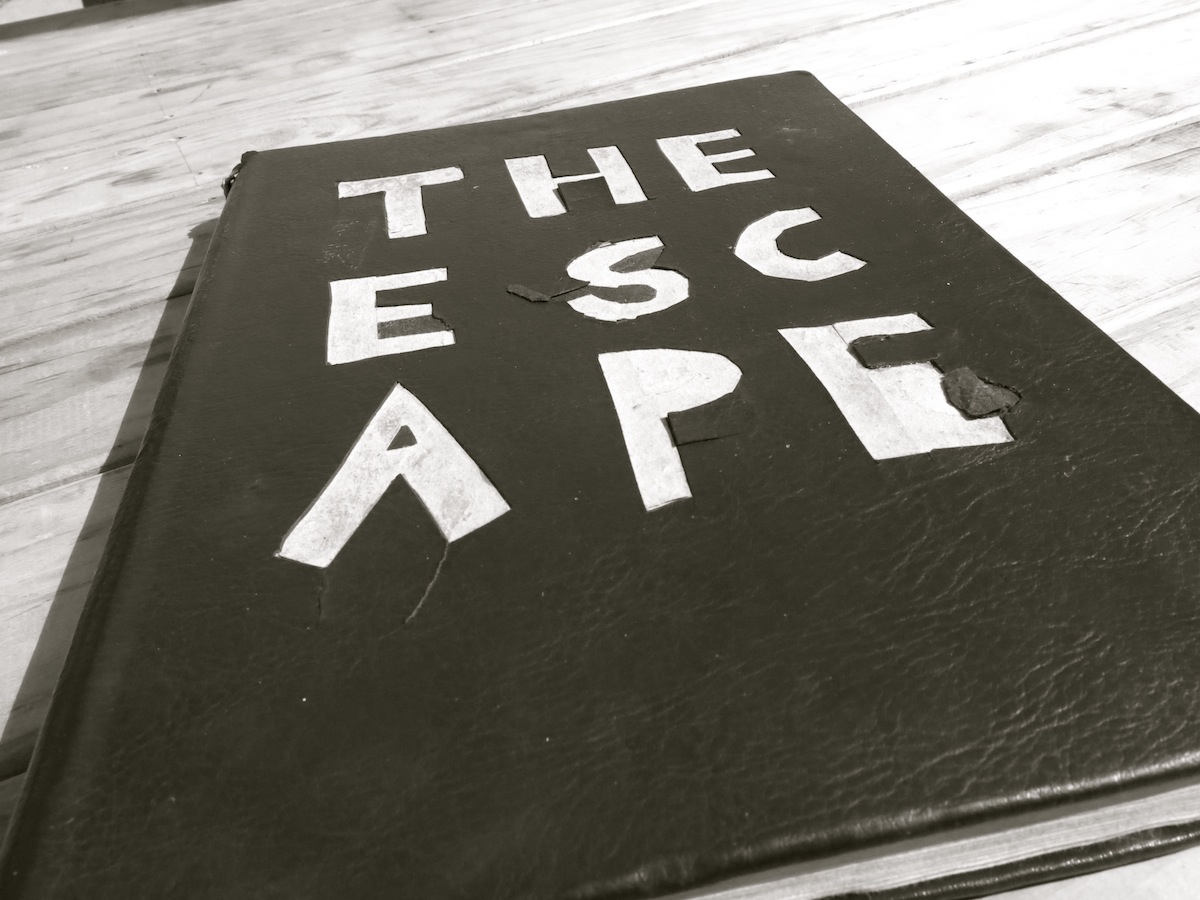