Three days ago I celebrated two years. In a half-broken foldable chair that came with my FLYING VAN I had a few lagers in solitude and glimpsed back on twenty-four diverse months of nomadic existence in Europe, Asia and Oceania. I flicked through my worn journal and lost myself in the myriad of invaluable memories it always brings me. On the 19th of February 2012 I left my childhood home in Stockholm on a push-bike. I've collected a few tales since, most of them told, many of them not. There's been a wide variation and contrast in most things; nature, countries, people, food, culture, mode of motion and activity-obsession. I've been on firm ground from sea level to world roof, beneath surface in deep blue oceans rich with life and under nylon wing at cloud base above snow-covered alps. I've had highs and lows. I've been happy, euphoric and content but now and then also anxious, restless and sad. I've spent plenty of time with myself but also in company; new and old friends, with and without x-girlfriend.

Below: Leaving home in Stockholm 2012. 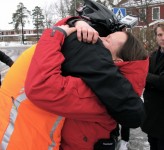 It's been one big journey and many small trips, parts planned in detail, parts totally spontaneous. I cycled and cycled and cycled and cycled and cycled and discovered it was pretty far from Sweden to Singapore. During ten months I had a specific finish line and a somewhat decided route. I was constantly on the move. Since arrival in Singapore fourteen months ago it's been more casual, things have slowed down. For a while I parked the bicycle and pulled on a wetsuit. An unlucky girlfriend got tired of tropics; fins in crystal clear water became walking boots on dirt in serious mountains. From massive natural peaks to gigantic skyscrapers to never-ending summer nights. We vacation-ventured back home and then I ended up returning east on my own. After a four wheeled tour of Taiwan with a good old friend I returned to day to day life on leather saddle. Things were not the same, not as they used to be, I wasn't happy. I was travel depressed and perhaps even ready to go home. I tried to boost myself with humpbacks but the road and cycling fatigue was severe. I needed serious change.

On New Zealand I've learned how to fly which was a game changer of magnitude. I'm fairly proud to say that I'm having the time of my life (again). I'm enjoying an overload of awesome, epic day followed by epic day, hours and hours in the air. This golden age is almost overwhelming; it's like a constant summer sunset, a long buzz and great rush. It puts a smile on my face I cannot hide. I can fucking fly and out of nowhere there is a new world to explore! Hands down, I've never felt a comparable draw to anything. It's a super heavy drug and without second thought I'm giving in to the addiction. It's just way too much fun.

I'm leaving New Zealand in two months but it will take me three until I’m back home. I’m going all around, east instead of west. I plan to finish in style; travel agenda and details closer to going-home-adventure. Two fantastic years my friends, thanks for being with me! All your support; likes, comments and e-mails means the world. Don't miss TASMAN AIR and make sure to like THE ESCAPE on Facebook!

It's time to look back and summarize three fantastic flying weeks in the Tasman Region. I arrived to Nelson ...
February 17, 2014Flying Oceania, New Zealand, Oceania

At TAYLORS MISTAKE I met Stefan, a happy surfer from Bavaria in Germany. We spent two weeks in and ...
February 5, 2014Flying Oceania, New Zealand, Oceania