The contrast in content is massive. A few days ago I shared stories and photos from midsummer in Sweden, now I'd like to report on a couple of weeks in Taiwan. From Stockholm I returned to Asia and Hong Kong with my friend Anton. Anton has an office job which meant that our collective time at the playground had a two week restriction. We decided spontaneously on Taiwan as our vacation destination.

Our three first days in the capital Taipei were relaxed. We found a great online deal and stayed at a pretty fancy hotel in central Taipei (Anton is a lawyer and preferably travels in style). We strolled night markets, ventured the city on the driverless trains, visited a few bars and enjoyed a fantastic skyscraper view. We had no expectations and nothing specific we had to do, visit, experience or see. We had a good time but neither one of us really fell for Taipei, when we set off with rental car for some light adventures along the Pacific Coast we were both in high spirits for the switch of environment.

All photos above: Taipei, capital city in Taiwan. 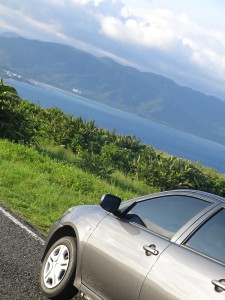 From our air-conditioned bubble we ventured the rugged coastline on smoothly paved roads. During a few days we drove a 600-kilometre stretch on the less populated east coast from Taipei to Kenting. Taiwan has impressive scenery, peaks that reach almost 4.000 meters, intact forests and an intensely blue ocean giving color contrast to the landscape. After three days in our cheap rental vehicle we reached the southern tip of Taiwan and the small surf village Jialeshuei. We found refuge at a family run hotel where we stayed two nights. We intended to surf some waves but that never happened. Our activities were more like those of senior citizens; slow strolls on the beach and naps after every meal (isn't it great falling asleep with a book in your face?). On our balcony from which we had a grand view over waves and ocean we sat in comfortable chairs drinking moderate amounts of cold lager. Life was good.

On our way back to Taipei we took a different and more mountainous route. The surrounding landscape changed significantly with the altitude and temperature difference. We'd had clear skies several days but as soon as we hit the mountains everything turned cloudy and misty which obviously made the views less spectacular. The roads were entertaining to drive with plenty of switchbacks and windy stretches even though I would've preferred two wheels instead of four. After two days on classic country roads we got back to the more colonized areas of north Taiwan. We stayed a night in Yilan before returning in intense traffic to Taipei. We had a few close calls but both car and travelers thankfully returned intact. We enjoyed a final night in Taipei and then Anton's vacation escape came to and end. I've been very happy for his company.

For the first time since November last year I'm without travel company, THE ESCAPE is solo again. Anton left Taipei two days ago and I'm sticking around trying to make substantial plans out of grand daydreams. I will not tell any details but I can reveal that the playground in Asia is coming to and end. At the moment there is a lack of travel-energy, I want to return to day-to-day life. What that means I will share in a separate post very soon. Stay tuned by giving me a LIKE on Facebook.

Map below: Our route in Taiwan. We saw the non-industrial parts of Taiwan along the eastern coastline. A trip on the west side would've been a very different experience.